Visit Downtown San Jose in Texas and be prepared to be surprised by the vibrant blend of historic and modern which has come together to create a unique district bursting with life.

Built on the banks of San Pedro Creek in the early 1700s to serve as a Spanish mission, the area founded as Downtown San Antonio has grown over the ensuing centuries and now holds seventh place in the rankings of North America’s most populated cities. Downtown San Antonio is a melting pot of ethnic diversity culturally influenced by the native indigenous Papaya Indians and subsequent settlers from as far afield as the Canary Islands, Africa, and Europe.

Tip: Start your trip to San Antonio with this Morning Sightseeing Tour with Lunch

No trip to the district would be complete without doing all of these fifteen best things to do in Downtown San Antonio so make sure you don’t miss any one of them. 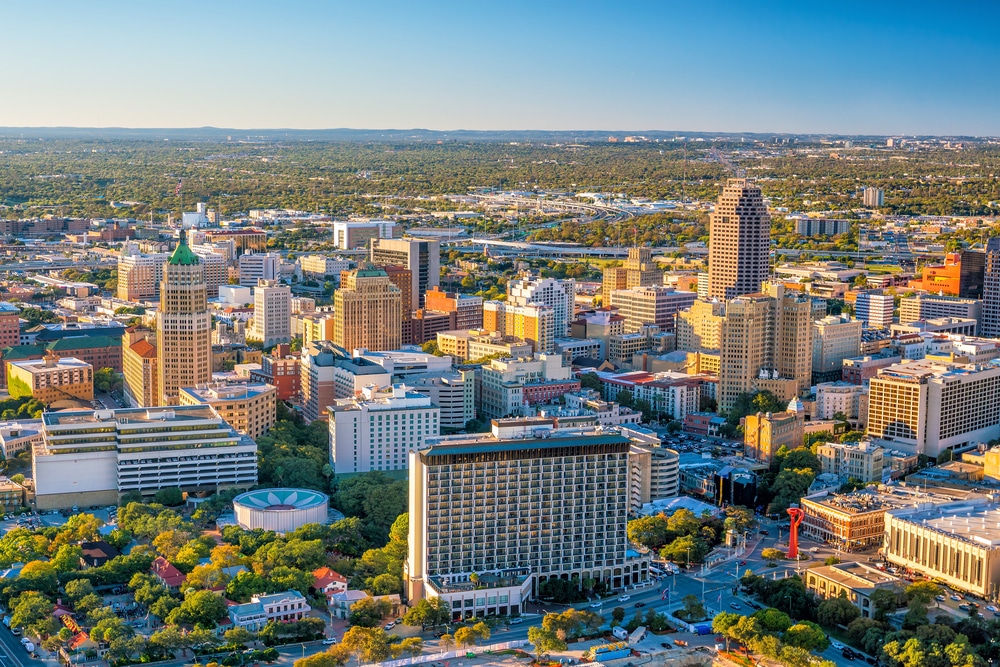 Soar into the skies on an Alamo Helicopter Tour to see Downtown San Antonio from above.

Board a Robinson R44 helicopter at the aerodrome on Mission Road, just outside of Downtown, and follow the course of the San Antonio River until it reaches the River Walk where it veers off to fly past the Tower of the Americas, the Alamo Mission and the historic district of La Villita.

The helicopter covers a distance of around fifteen miles and flights last for a duration of ten minutes.

2. Tower of the Americas 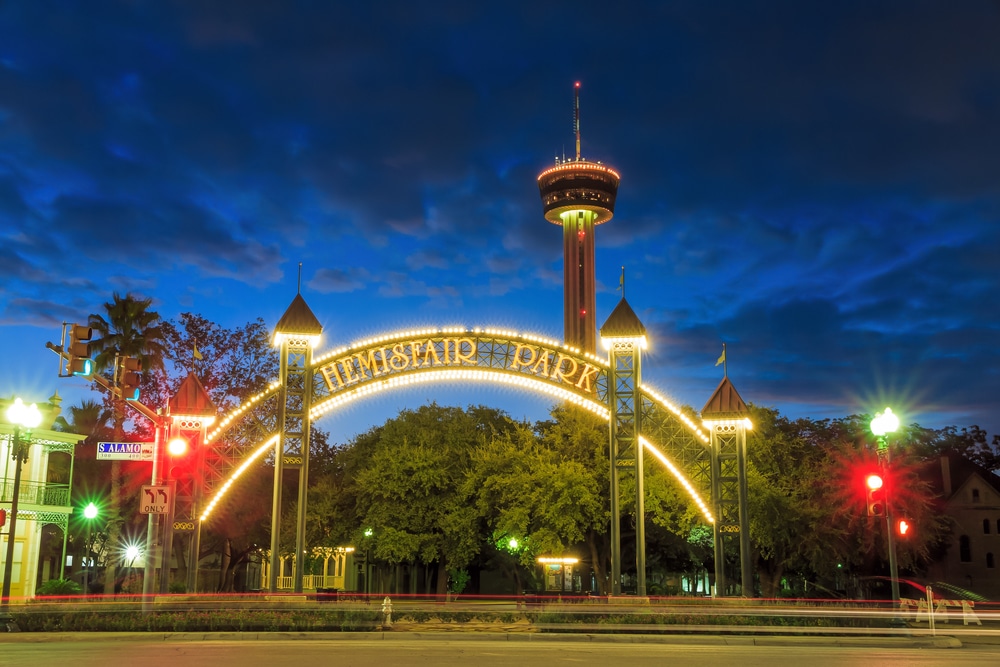 Tower Of The Americas

The Tower of the Americas is a seven hundred and fifty-foot observation tower and sky-high restaurant on Cesar E Chavez Boulevard in Downtown San Antonio.

Three elevators ascend passengers to the tower’s observation deck where they can enjoy the incredible three hundred and sixty-degree panoramic views.

The tower has a cafe in the observation deck plus a revolving restaurant on the floor above which is perfect for eating dinner while watching the sun set on Downtown San Antonio.

Check out the recommended hotels in San Antonio, Texas (TX) 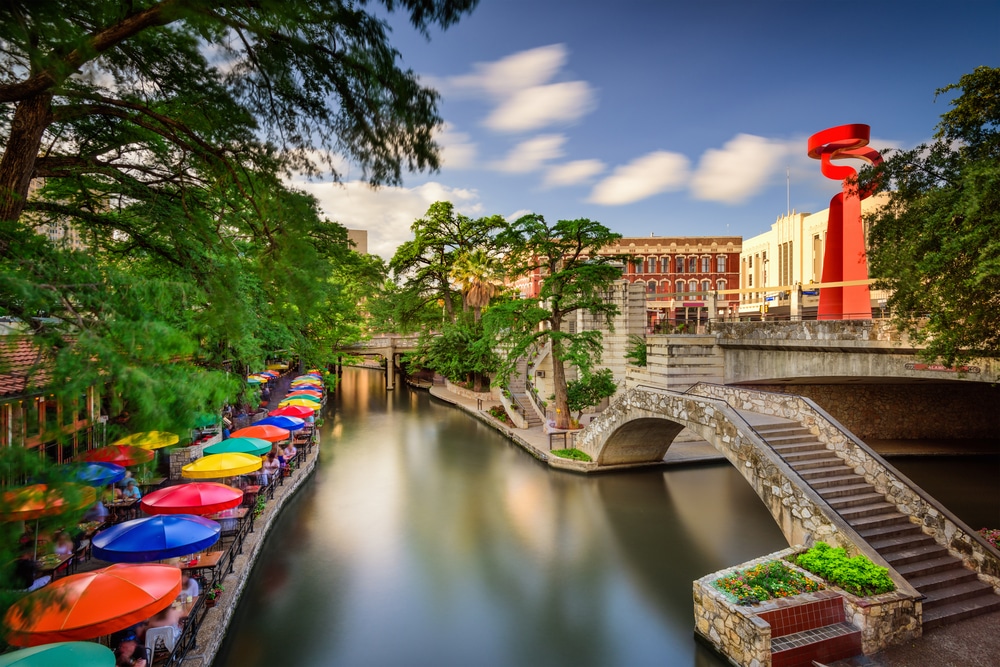 Not unlike the canals of Amsterdam, the River Walk in Downtown San Antonio is lined with cafes and restaurants and has a real cosmopolitan atmosphere.

The River Walk, which is fifteen miles long in total, runs through the downtown district alongside the meandering San Antonio River for about five miles. Stroll the entire length of the walkway, sit on one of the cafe terraces to do a spot of people watching or even tie the knot on the heart-shaped Marriage Island.

There are five historic mission sites located along the River Walk, a theater, art museum, and shopping mall. Don’t want to walk? Read about a River Walk Cruise further on.

Need transport to get around: San Antonio Hop-on Hop-off Bus 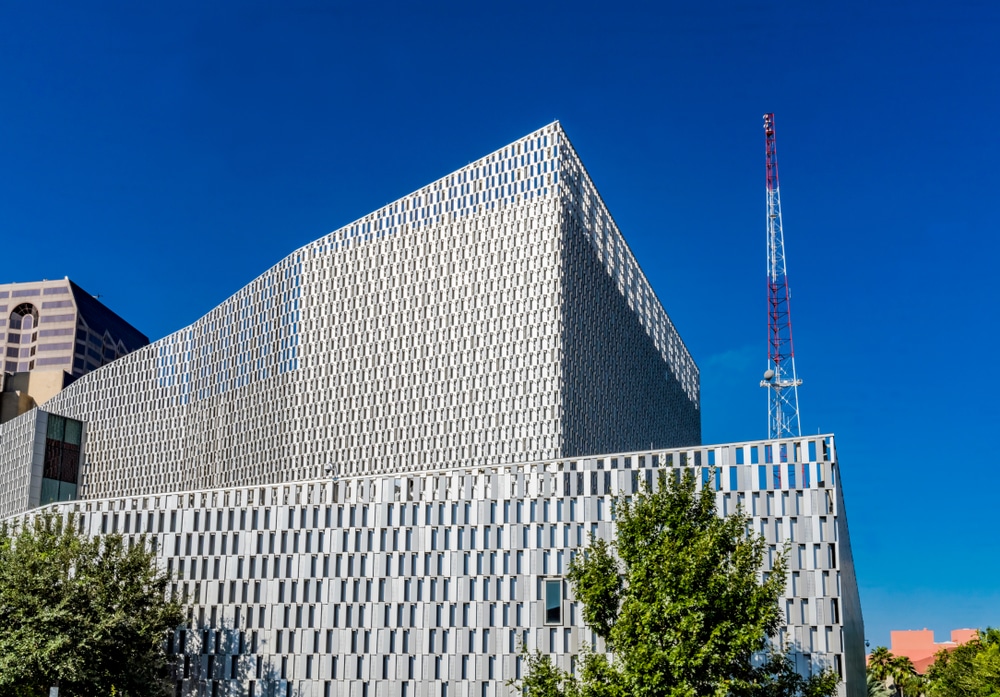 The Tobin Center For Performing Arts is a multi-purpose auditorium in Downtown San Antonio used for diverse live performances ranging from Billy Idol to the Ballet San Antonio.

The venue has a seating capacity for over one thousand seven hundred spectators distributed over four tiered levels.

As well as being the home of the San Antonio Symphony Orchestra the Center has a black-box theater for intimate dramatic performances.

The Market Square is a historic plaza in Downtown San Antonio which has served as a market and social hub in the district since 1890.

The Market Square is the size of three entire blocks and full of shops and galleries where visitors can not only purchase authentic Mexican handicrafts but also watch the artists at work.

While in Market Square, reputed to be the largest Mexican Market in the US, don’t miss out on trying some of the great Tex-Mex on offer in the food hall or drinking a coffee in the Mi Tierra Cafe and Bakery accompanied by live music from a Mariachi band. 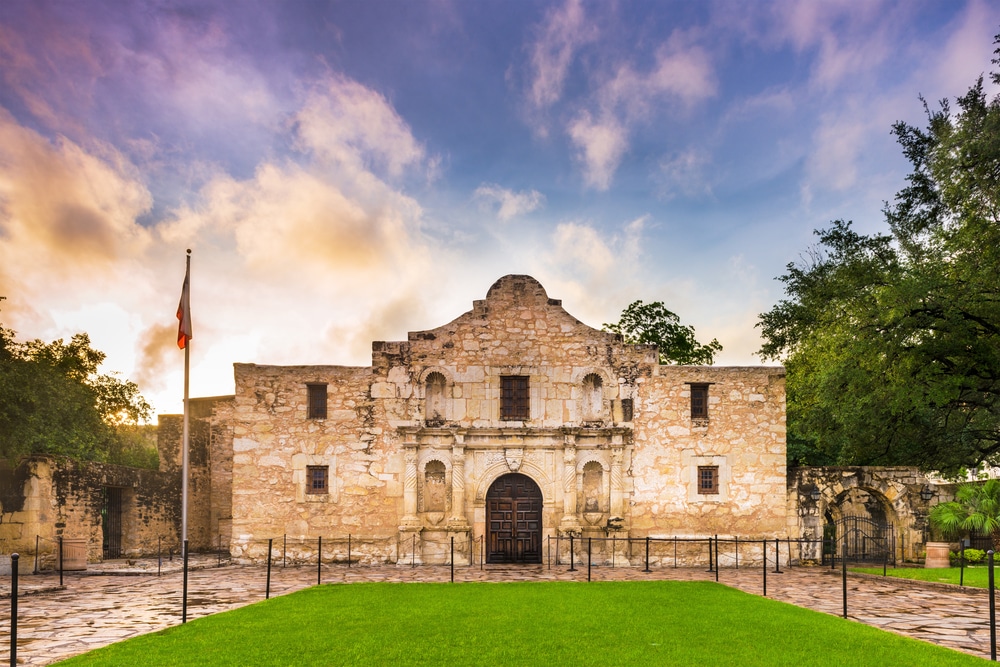 The Alamo in Downtown San Antonio’s Alamo Plaza is an eighteenth-century Spanish mission and the site of one of the most famous battles in the history of Texas’s independence from Mexico.

The fortress, now a museum, contains several well-preserved structures from the era including a church and military barracks. There is also a digital reconstruction of the battlefield available on the museum’s downloadable app.

One hour docent-guided tours of the Alamo can be taken by making a reservation twenty-four hours before visiting. 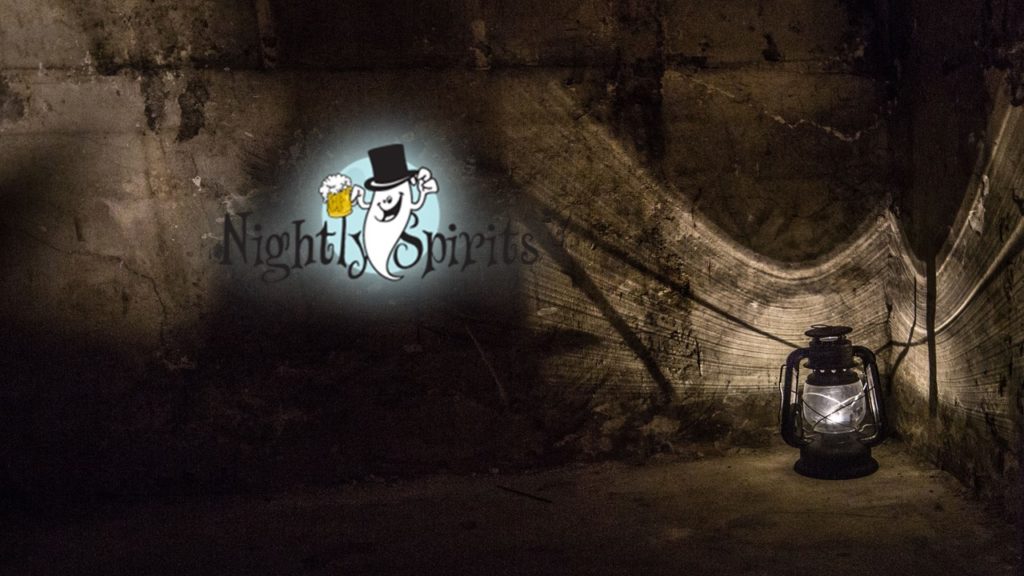 There’s only one thing better than a pub crawl, and that’s a paranormal pub crawl. Delve deep into the darker side of Downtown San Antonio’s bar scene on a Nightly Spirits Ghost Tour and Pub Crawl.

Meet a guide in period costume at Bar 414 and head off on a mile long walking tour of haunted bars, basements and ballrooms stopping off for reviving refreshments at several pubs along the way.

Tours last for around two and a half hours, and all participants must be over twenty-one years of age. 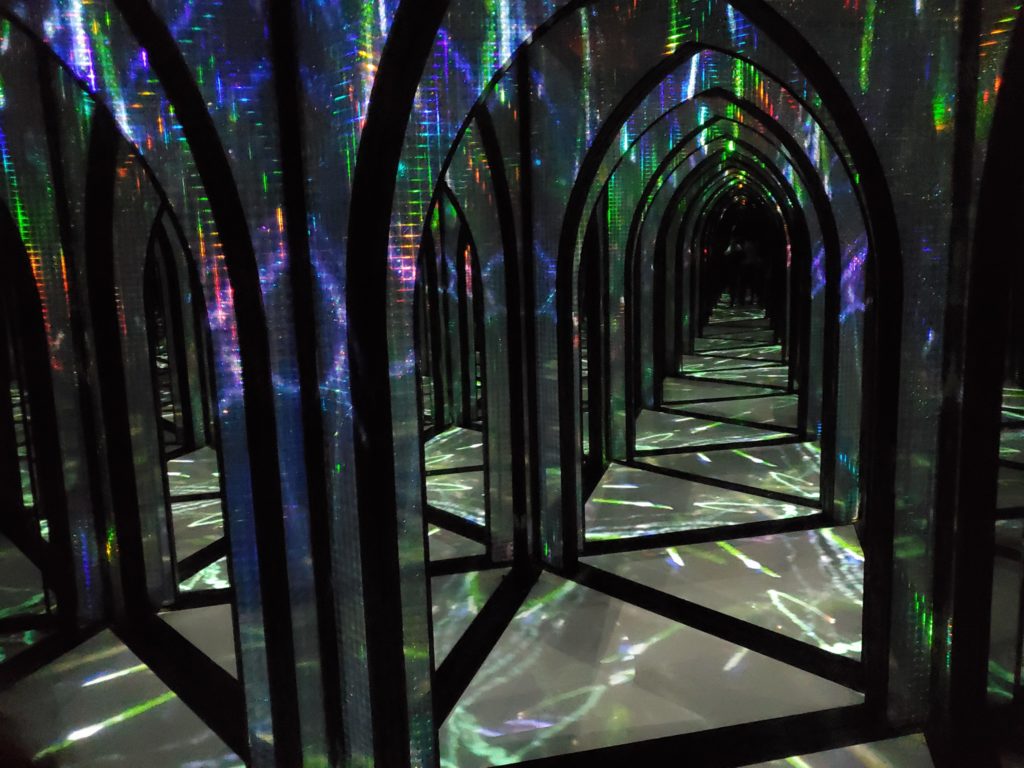 Freak out at your own reflection in the Amazing Mirror Maze in Alamo Plaza in Downtown San Antonio.

Enter the labyrinth then try to find your way through the corridors of mirrors. It’s not as easy as it sounds. You’ll meet yourself everywhere you turn.

If you beat the Mirror Maze, then try the even trickier Laser Vault Challenge and see if you can escape the ever-changing pattern of laser beams before your time runs out. 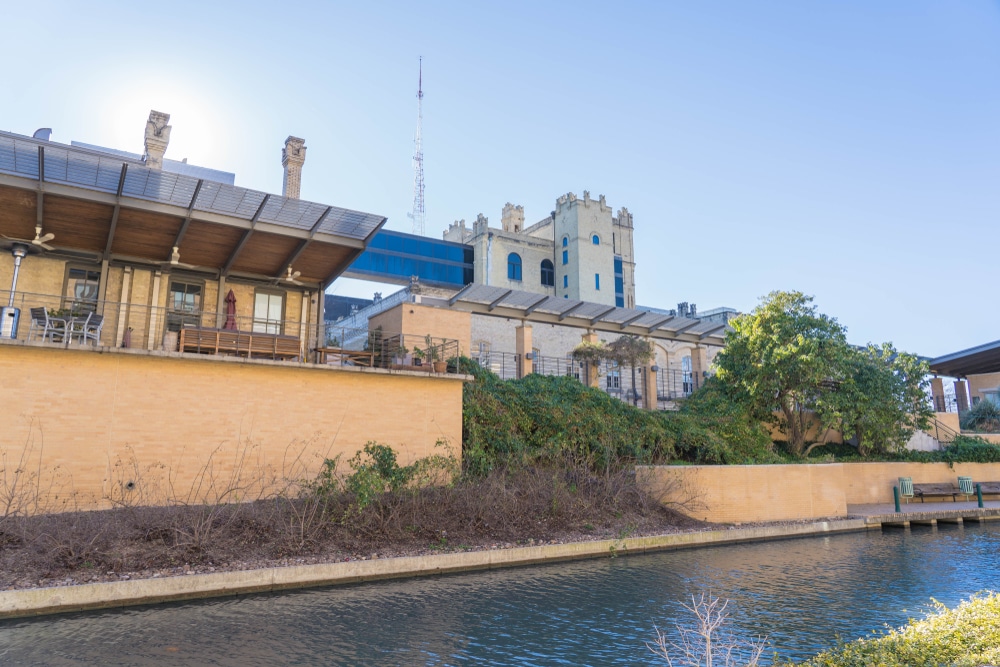 The San Antonio Museum of Art on Jones Avenue in Downtown San Antonio houses both ancient and modern art in all forms.

The museum has several themed galleries dedicated to Asian art and another to art from Latin America. The museum specializes in collecting contemporary Texas art dating after the nineteen sixties and has the most extensive collection of ancient Mediterranean artwork of anywhere in the US.

There is an on-site Italian-inspired restaurant, Tre Trattoria, which serves traditional and innovative cuisine from the Tuscany region and has a terrace overlooking the San Antonio River. 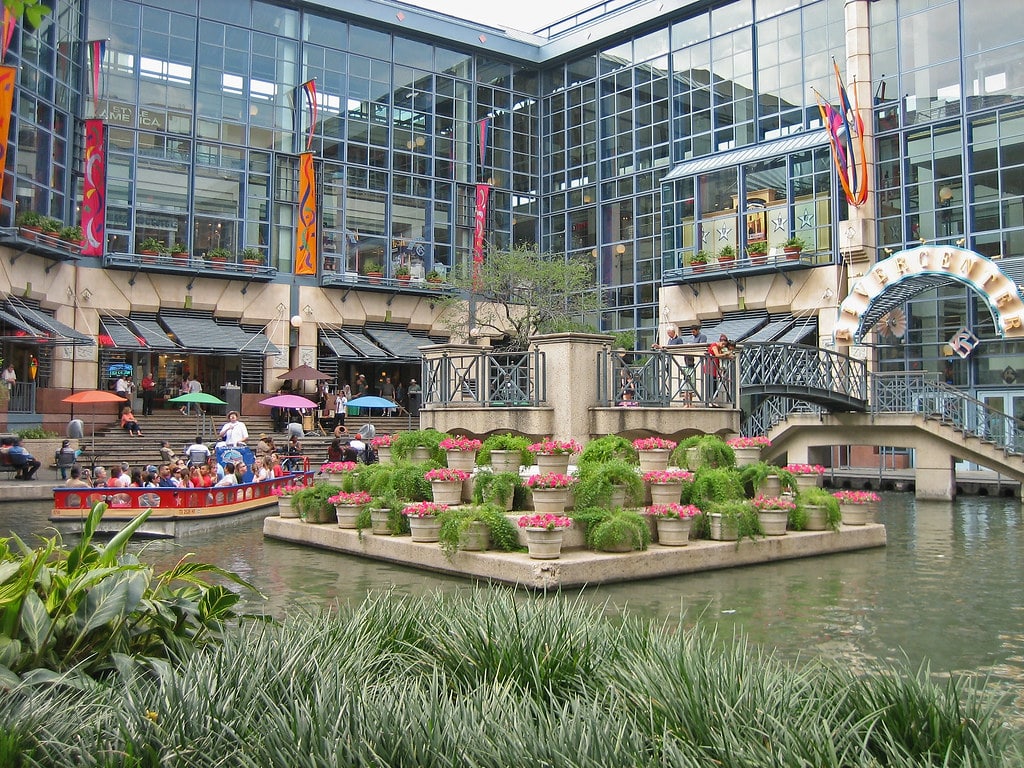 Located on Downtown San Antonio’s River Walk, the Shops at Rivercenter is a retail mall with over one hundred outlets and the place to shop in the downtown district.

The mall has a stunning, open-air aquatic plaza surrounded by cafe terraces at its center which is accessible from the river and navigable by boats.

Full of big name stores, including Macy’s, the mall also houses an Imax cinema, a theater, and hotel.

Check out the recommended hotels in San Antonio, Texas (TX) 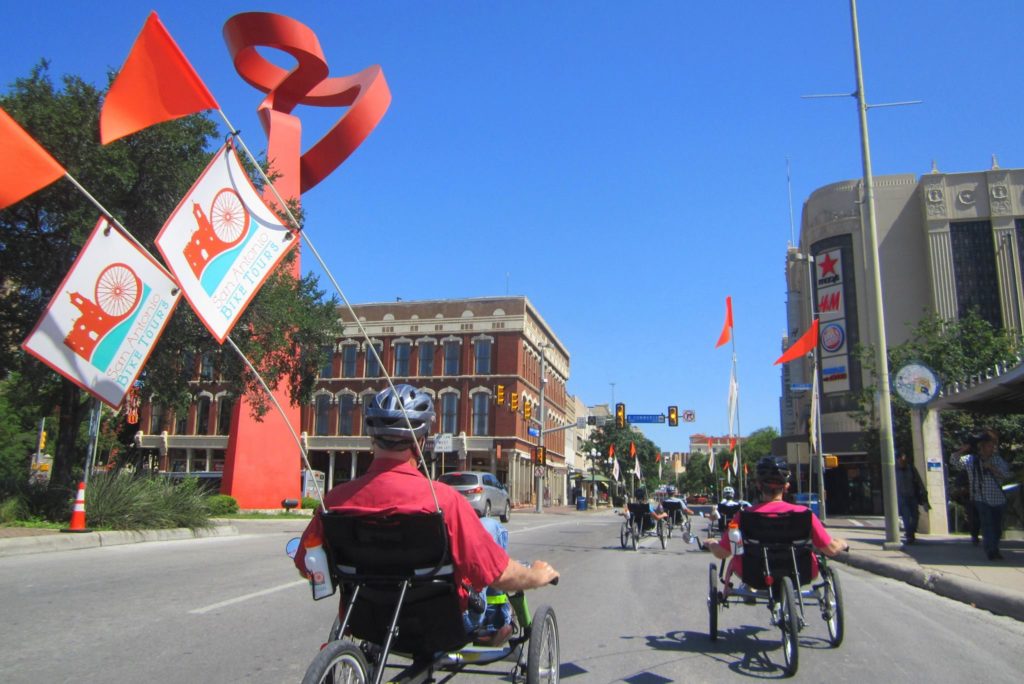 No need to worry about balancing on two wheels on a San Antonio Bike Tour, you’ll be pedaling a recumbent trike.

Lay back to enjoy cycling around Downtown San Antonio, along the River Walk and out to Mission Reach while spotting the district’s plentiful public artworks and listening to an audio narration over headphones.

The tours cover a distance of between seven to twenty-five miles and last from two to six hours depending on the chosen route. 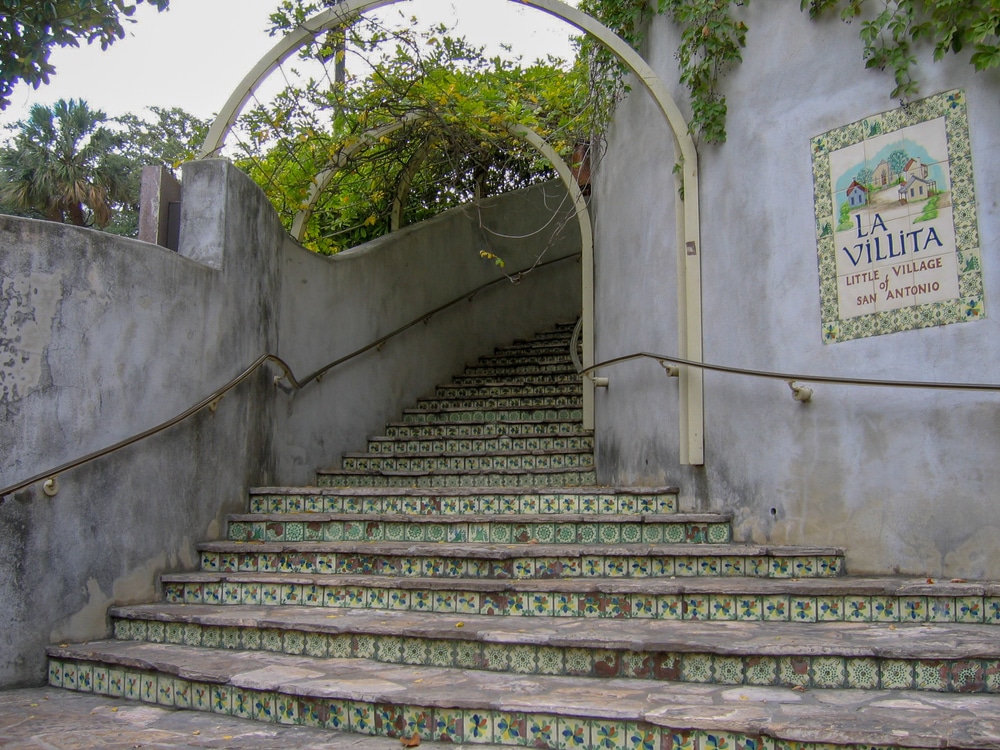 La Villita is an area in Downtown San Antonio renowned for its art galleries and handicrafts all with a strong Mexican influence.

The Villita, or La Villita Historic Art Village, with its cobbled streets and plazas was one of the first neighborhoods in San Antonio and still retains much of its original Spanish and Hispanic architectural charm.

Explore to discover the boutiques offering unique, handmade items and find the restaurants like the Guadalajara Grill serving up traditional Mexican food. 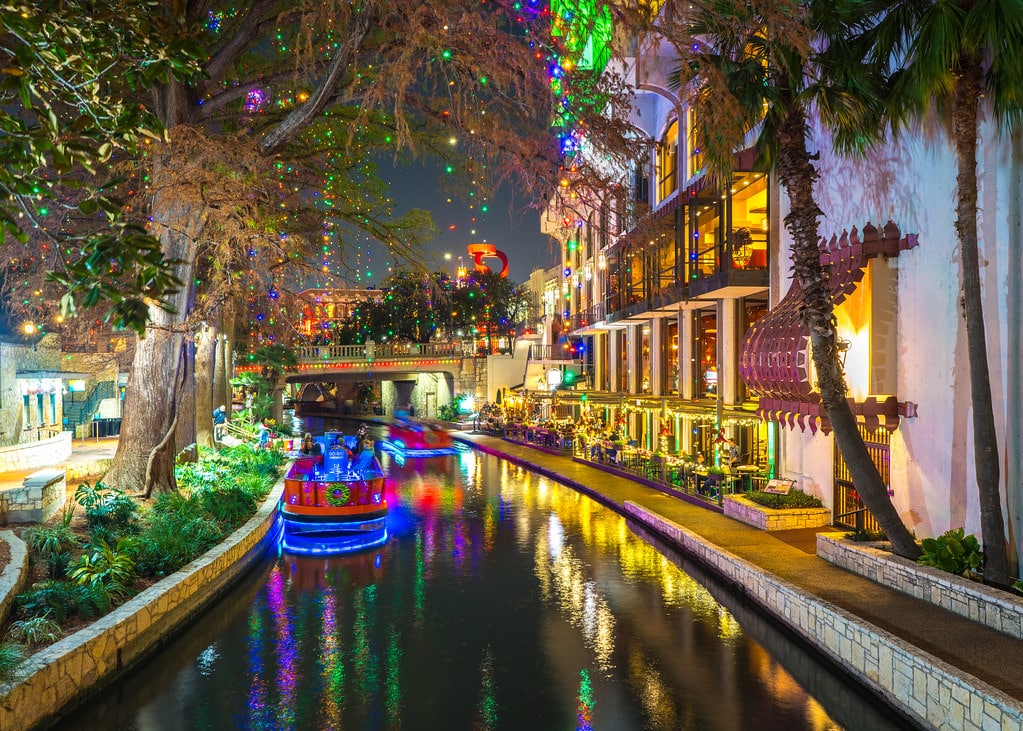 Go for a slow ride through Downtown San Antonio along the River Walk route on a colorful, Go Rio electrically-powered boat.

The forty seater pontoon-style craft offers a shuttle, hop-on-hop-off service picking up at any of thirteen stops along the River Walk.

With a day pass, you can get off when you want and rejoin the boat when it passes an hour later or to hear the full narration from the Captain about historic Downtown San Antonio, stay onboard for the entire trip. 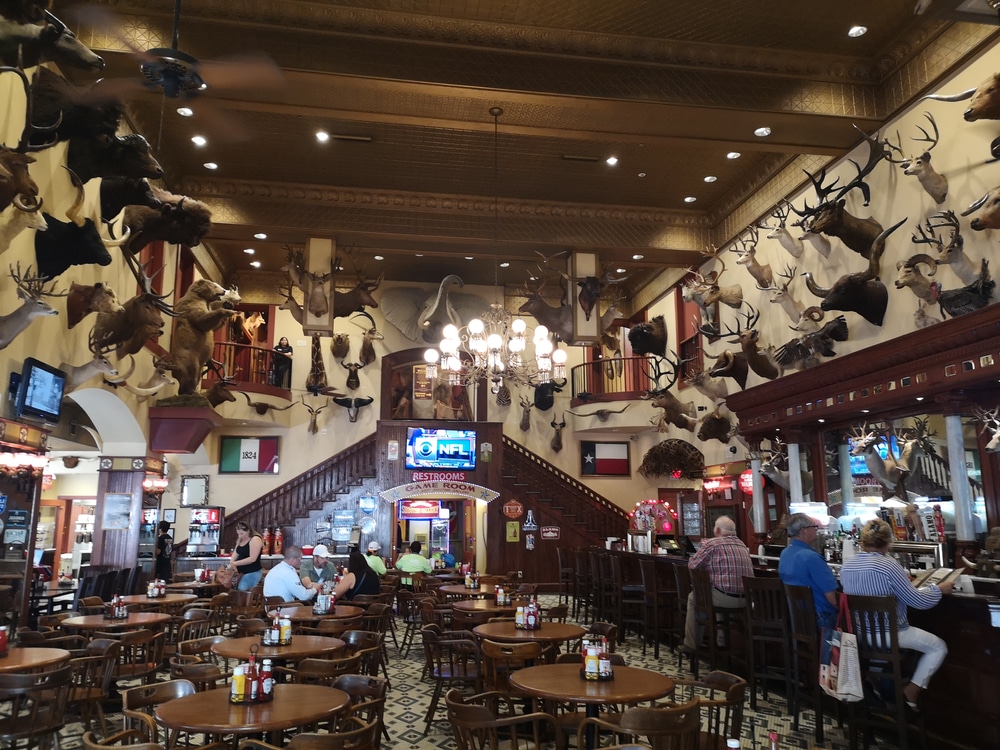 The Buckhorn Saloon is a historic watering hole on East Houston Street in Downtown San Antonio which is also a museum. The saloon opened in 1881 and is still adorned with some of the original furnishings including an extensive collection of horns, antlers, and rattlesnakes.

Sit back in the Wild West bar and sip an Alamo Golden Ale or a Tequila based Buckarita under the beady stare of the buffalo and antelope heads hanging on the wall then grab a Buckhorn burger from the cafe. It’s just a bit freaky but not as freaky as the final entry on this list of the best fifteen things to do in Downtown San Antonio.

15. Ripley’s Believe It Or Not 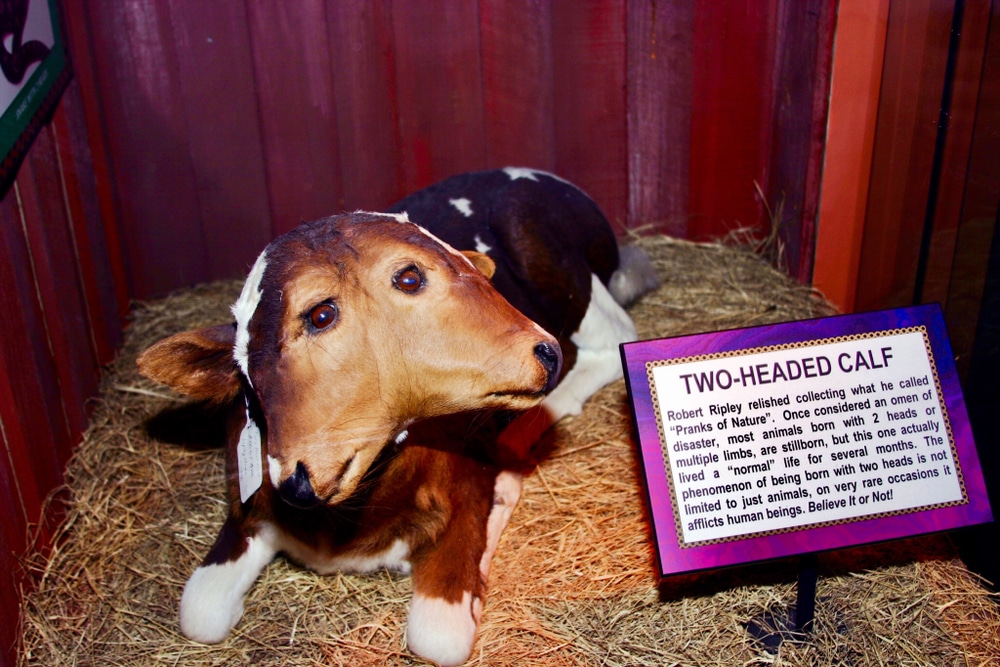 Ripley’s Believe It Or Not

Visit the Ripley’s Believe It Or Not Museum in Downtown San Antonio’s Alamo Plaza for a dose of freakish fun.

Ripley’s celebrates everything classified as an oddity so expect to see some pretty strange things in the eighteen thousand square feet of exhibition space. There are shrunken heads, the world’s tallest man, a psychedelic walkway and lots of other weird and wonderful stuff.

The post 15 Best Things to Do in Downtown San Antonio appeared first on The Crazy Tourist.